Two stalwarts of the Kingston branch of the National Trust were recognised in the Australia Day Honours List this year for their services to the community.
Frank England and Alison Stillwell both received a Medal of the Order of Australia (OAM).

A generous donor and tireless community volunteer for more than 70 years, Frank England was honoured for his contribution to a range of organisations, including the National Trust, the Kingston show society and the Royal Flying Doctor Service.

Frank joined the National Trust in 2005, when he retired from farming and moved into the town. Serving on the branch committee and as a volunteer guide, he was instrumental in establishing and maintaining the gardens around the Cape Jaffa Lighthouse. He provided a bore and set up irrigation for the gardens, and assisted with fencing for both the lighthouse and the museum.

Frank is particularly passionate about the lighthouse and enjoys sharing his deep knowledge of its history. Records indicate that he showed more than 6000 visitors through the lighthouse outside formal opening hours alone, while he was on site tending the gardens.
His volunteering life began in 1948, when he became a sheep steward at the Kingston show. Frank also donated land for the Kingston Medical Centre and retirement village, and has been a philanthropic supporter of the Royal Flying Doctor Service for almost 30 years, with the Adelaide headquarters operations room named in his honour in 2014. 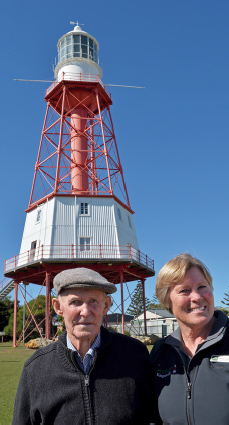 A teacher by profession, Alison Stillwell joined the National Trust after becoming curious about the view from her kitchen window. She and her family moved to the town in 1986 when the former lighthouse keepers’ cottages were available for education department housing. After falling in love with the cottage and its view of the lighthouse, the Stillwells bought one.

Alison has been secretary of the branch and a volunteer guide since 2015. She coordinates the roster of lighthouse guides and information presentation for the town’s heritage markers. Alison also instigated development of the Margaret Brock shipwreck display, which received a highly commended award in the 2017 Museum and Galleries National Awards.

Kingston branch president James Ringshaw praised both recipients for their valuable contributions to the Trust and the wider community. “They are both passionate about history, and have played very significant roles in conserving our heritage and sharing that enthusiasm with others,” he said.